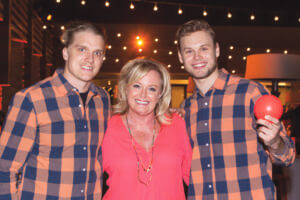 Whether you’re an Anaheim Ducks Fan or a charity donor who loves the Orangewood foundation, then this event is for YOU! Yes!   Where else can you mingle with Duck players, eat amazing food and bid on some great items not normally available for the average person? It’s an amazing opportunity for any DUCK fan to get their DUCK on and help a worthy cause at the same time.
Picture a sea of orange at the Anaheim Ducks Center Ice Party as over 350 Ducks fans and Orangewood donors enthusiastically donned the “Go Orange for Orangewood” theme.
Held at Pasea Hotel and Spa in Huntington Beach, the annual event provided guests the opportunity to mingle with Ducks players including Ryan Getzlaf, Jakcob Silverberg, Cam Fowler, and Executive Vice President Tim Ryan (who also serves on Orangewood’s board).
At various wine stations, guests drank wines from Giracci Vineyard and Farms, One Hope, Orange Coast Winery, Round Pond, We Believe Wines and The Wine Cellar. Guest also enjoyed beers from Golden Road Brewing Company. The event offered the opportunity to bid on more than 60 silent auction items, plus three sports-oriented live auction items.
The event committee was led by Kimberly Kirksey who is also the chair of the foundation’s 44 Women for Orangewood auxiliary. Title sponsors were Samueli Foundation and CRI Socal, Inc. The event is expected to net over $85,000 for Orangewood’s programs for foster and community youth.
Center Ice guests were treated to the opportunity to bid on three, unique live auction items: 1) A “sports extravaganza” package featuring tickets to watch Southern California sports team including the Anaheim Ducks, 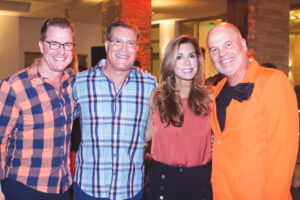 LA Clippers and Los Angeles Angels (sold at $4,500); 2) An “all- star experience” that included luxury accommodations and a roundtrip airfare to St. Louis to enjoy the 2020 NHL All-Star Weekend (sold twice for $7,000); and 3) A “wine & dine” package featuring a three-hour cocktail party for 20 people at Eddie V’s Prime Seafood in Newport Beach with Ducks players Adam Henrique and Nick Ritchie (sold for $5,500.)
The 60+ silent auction items included Anaheim Ducks signed memorabilia including ice skates signed by #47 Hampus Lindolm and a goalie stick autographed by #36 John Gibson; getaways to Big Bear Lake; spa and beauty packages to Burke Williams and other salons; and activities including an overnight experience in a Tesla, a four-course dining experience to Mastro’s Steakhouse, shopping experience at Fashion Island and tickets to the 2019-2020 Pacific Symphony Classics concert at Segerstrom Concert Hall.
Speakers during the brief program included, who also serves on Orangewood Foundation’s board of directors, and Orangewood Foundation CEO Chris Simonsen. The event emcee was Ducks reporter Kent French.
The mission of Orangewood Foundation is to prepare foster and community youth to reach their greatest potential. Founded in 1981, the foundation is one of the leading providers of services to these teens and young adults. Foundation programs focus on four critical areas: health & wellness, housing, life skills & employment, and education. Annually Orangewood serves over 2,000 youth. Beyond its programs, for thousands of youth in our community Orangewood means “family”, “opportunity” and hope. www.orangewoodfoundation.org
44 Women for Orangewood, an auxiliary of Orangewood Foundation, is a unique group of women passionate about helping Orange County’s foster and community youth. It was founded in 1999 by Susan Samueli with 44 of her closest friends. Since then, the group has doubled in size. It is made up of some of Orange County’s most philanthropically-minded and dedicated women who are devoted to Orangewood’s mission. www.44womenfororangewood.org

Click here or the image to open the FBN form.

For more information regarding all legal notices and instructions, please visit our Legal Notice Help Page.